Ward Security has announced its top performing employees of the year at the annual Star Employee Awards Ceremony. From its 550-strong team, Ward Security presented nine employees with a Star Award in recognition of their commitment, loyalty and outstanding achievements during 2013.

Alex Ambrose, who has been an employee of Ward Security for seven years, was formally recognised by receiving the Outstanding Achievement Award. Ambrose was described at the ceremony as someone “who prefers to work under the radar” and has amazed the head office team with his ability to efficiently collate and analyse data as well as problem solve. 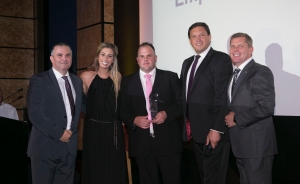 Lee Chapman is this year’s winner of the coveted Employee of the Year Award which was presented by Gareth Tancred, the CEO of the British Institute of Facilities Management. Initially employed as a dog handler in May 2007, Chapman quickly progressed to the position of contract manager and is viewed by Ward Security as one of its rising stars.

Chapman was described by the panel of judges as someone who is extremely proactive and diligent and an outstanding ambassador for the company. He was also noted as someone who is a thoughtful and compassionate person which is clearly visible both in the relationships he has with his clients and in his interaction with the security dogs he trains.

Commenting on the Star Employee Awards, David Ward – managing director of Ward Security – explained: “Kevin and I always look forward to these awards with a great sense of pride and satisfaction. We’re delighted to host this evening as a Thank You in recognition of the outstanding team members we have at Ward Security. Such is the quality of our team that this year’s winners were harder than ever for the judges to decide upon. We would like to congratulate everyone who was nominated throughout the course of the year and, of course, our worthy winners.”

The 2014 ceremony represents the seventh annual Star Employee Awards run by Ward Security and the culmination of monthly employee awards for which staff are nominated throughout the year. This year’s event took place on Friday 15 August at The Grange City Hotel in London.