Globalstar Europe Satellite Services Ltd, a wholly-owned subsidiary of Globalstar Inc and a specialist in the field of satellite messaging and emergency notification technologies, has announced that Scottish Water has deployed over 250 SPOT Gen3 satellite messengers to safeguard employees who work on their own in areas with unreliable or non-existent mobile coverage.

Hundreds of Scottish Water employees work in remote parts of the country, often on a solo basis, and manage assets including the reservoirs that supply water to over 2.54 million households and 152,000 businesses. While 49 remote-working teams are already using SPOT, Scottish Water is also offering devices to all other employees registered as lone workers. These employees now have a communications lifeline wherever they are, with small, robust SPOT Gen3 devices that communicate reliably over Globalstar’s Low Earth Orbit satellite network.

Scottish Water has pre-configured the SPOT Gen3 devices with two services. If an employee has an emergency, they can press SPOT’s one-touch SOS button. There’s also a Help button for non-life-threatening situations. Pressing either button automatically transmits the end user’s precise GPS location to Scottish Water’s Internal Communications Centre (ICC). The ICC operators then either contact the Emergency Services or locate a nearby Scottish Water team who can help their colleague.

Scottish Water chose SPOT Gen3 because of its ease of use and robustness, in addition  to the accuracy of its GPS transmissions. Before deploying SPOT earlier this year, Scottish Water relied solely on a system whereby employees registered their planned movements by phone then, if they didn’t call back by an agreed time, the issue would be escalated through their line managers.

“With winter around the corner, we expect SPOT to come into its own as an important part of our Health and Safety strategy,” said Kes Juskowiak, water operations general manager at Scottish Water. “With reliable satellite communications, we can get help to our employees whenever it’s needed and wherever they might be. SPOT is a lifeline providing reassurance to families and colleagues that each lone worker is in safe hands.”

“With staff welfare moving up the corporate agenda, we’re seeing a significant adoption of SPOT by commercial and non-commercial organisations worldwide,” said Gary King, Globalstar’s EMEA sales manager for SPOT. “By deploying SPOT, Scottish Water is demonstrating its commitment to safeguarding its employees as they go about their work in some of the most remote parts of the UK.”

Veracity, the provider of innovative and intelligent solutions that solve real-world IP video challenges in transmission, storage and display has won a Vision in Business for the Environment of Scotland (VIBES) 2016 ‘Environmental Product or Service’ Award, which recognises the significant contribution to the environment made by the company through its products and approach to end-to-end product lifecycle management.

VIBES* is Scotland’s leading environmental awards scheme. For the last 17 years, it has recognised and rewarded those businesses contributing towards the country’s sustainable development by taking significant steps to either improve or reduce their impact on the environment. This year, 32 Scottish businesses were shortlisted from a record number of entries. Each of the finalists underwent a rigorous judging process, including a programme of site visits, in order that their environmental practices could be assessed.

The award recognises the significant contribution to the environment which Veracity’s products make while delivering cutting-edge technology and consistently reliable quality. The manner in which the company and its staff demonstrably commits to reducing energy costs in the production, performance and lifecycle of its products was duly recognised by the Judges.

Alongside the continued enthusiasm of the team, this award should assist in stimulating a wider adoption of the technology globally, in turn creating measurable environmental and economic benefits through a quantifiable reduction in the carbon footprint associated with the rapidly growing surveillance industry. 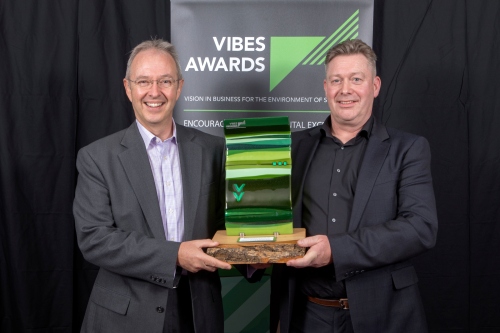 Both Veracity’s COLDSTORE and TIMENET solutions were mentioned specifically for the significant levels of energy saved, as was the company’s consideration of the whole end-to-end product lifecycle.

“COLDSTORE has won a number of awards for technical innovation, so we’re delighted to see that its environmental credentials have also now been recognised,” said Alastair McLeod, Group CEO of Veracity. “Winning in our first year of entering these awards is a great achievement. We’re very grateful to the Veracity team that developed COLDSTORE, the design of which is underpinned by the three core values of the company: innovation, reliability and environmental awareness.”

Gillian Bruce, chair of the VIBES Awards, commented: “The VIBES Awards recognise and showcase the fantastic work being undertaken by businesses across the country to put sustainability at the heart of their operations, often saving money in the process. We’ve been very impressed by the high standard of entries in 2016, and with a record number of companies entering the VIBES Awards this year, it’s encouraging to see that so many businesses understand how reducing their environmental impact can also benefit their business. We would like to congratulate Veracity and all of our 2016 winners and finalists and hope that many more companies will be inspired to follow in their footsteps by recognising the benefits of sustainability in business.”

Alongside winning the Environmental Product or Service Award, Veracity was also shortlisted in the VIBES Innovation category and will now go forward to the larger-scale European awards which take place in 2017.