From Tuesday 17 January to Thursday 19 January, Europol hosted its first international conference on jewellery robbery and burglary under the banner ‘Project Diamond’. SaferGems – a joint initiative established by the British Security Industry Association, T.H. March Insurance Brokers and the National Association of Jewellers (NAJ) – was invited to deliver a presentation at the event, which took place at Europol’s headquarters in The Hague.

‘Project Diamond’ was initially created as a follow-up to ‘Project Pink Panther’, which was initiated by Interpol back in 2007 in an effort to assist law enforcement around the world in apprehending members of the international network of jewellery thieves that had originated from the Western Balkans.

Interpol’s project ended last year, and it was then decided that ‘Project Diamond’ would be more extensive in its focus, targeting criminal networks involved in jewellery robberies and burglaries from Europe as well as the Baltic Sea and Western Black Sea areas.

In attendance were over 70 experts from nearly all of the EU Member States, as well as other representatives from third parties from Europe, Asia and the Americas, including private jewellery and watch companies. 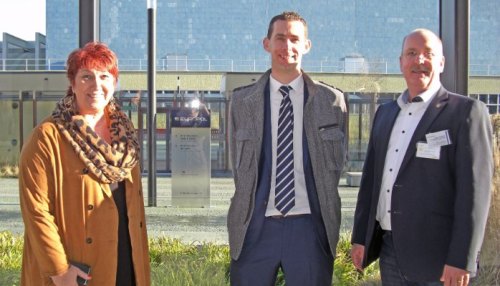 Intelligence officer Lee Henderson represented SaferGems, an initiative sponsored by the NAJ and T.H. March Insurance that co-ordinates data on jewellery crime and facilitates information sharing between jewellers, pawnbrokers and the police. At the event, Henderson delivered a presentation about the background of SaferGems, crime trends and statistics, the SaferGems Watch Register and the initiative’s success stories.

“The presentation was very well received by the experts in attendance and raised many questions from the audience,” stated Henderson. “We also received positive support and feedback from our colleagues that attended on behalf of the Metropolitan Police Service and the West Midlands Police.”

The project comes at a vital time, with the EU facing increased trends in jewellery robbery and burglaries. It has been reported by Europol that these criminals are becoming more violent in their tactics, using heavy vehicles in order to infiltrate jewellery stores and putting the lives of customers and staff at risk.

The aim of the conference was to harness the existing knowledge and expertise of attendees in order to discuss the best ways in which to fight this rising tide of crime.

Given the increased trends in jewellery robbery and burglaries, the conference came at a crucial time and provided SaferGems with an opportunity to share information and intelligence with police officers from the New York Police Department, The Garda, Federal Police Belgium, Organised Crime Finland and Antwerp Diamond District.

Henderson concluded: “As a result of our participation in the conference, law enforcement agencies from across the world are now more aware of the capabilities of the SaferGems initiative and the successes that it continues to have.”