Ward Security has taken ownership of a new electric car as part of an ongoing commitment to reducing the company’s carbon footprint. The new Nissan Leaf has been deployed at the International Trading Estate in Southall, where the company provides 24-hour security for the entire estate.

Ward continued: “It’s important that we have a particular focus on transport as the nature of the business means we have a lot of staff using a lot of vehicles to travel a lot of miles, so the challenge is considerable and takes a concerted effort from everyone across the company. However, we’re delighted by what we’ve achieved so far. The purchase of a new electric vehicle is another step towards further reductions in our carbon footprint.”

During 2016, Ward Security is looking to replace 18 vehicles with newer vehicles that offer even better fuel consumption and lower emissions. The new vehicles will be limited to 62 mph and feature stop/start technology designed to further increase miles-per-gallon and reduce emissions.

Ward Security has a strong commitment to corporate social responsibility. As well as addressing environmental concerns, the company regularly sponsors, contributes towards or fundraises for a number of charities and organisations in various categories, including Abigail’s Footsteps – a national charity that’s making positive changes to the lives of bereaved families and promoting safer births.

The company sponsors Aylesford Rugby Club and also runs safety campaigns with local schools. Ward Security supports the Medway Foodbank Trust by providing a free security service for the foodbank’s warehouse and volunteering staff to help in the warehouse, and regularly allows members of staff to take time off for charity work.

The Security Systems and Alarms Inspection Board (SSAIB), which is celebrating its 20th Anniversary in 2014, has appointed its next CEO. Alex Carmichael – presently director of technical services and exports at the British Security Industry Association (BSIA) – will be taking over from Geoff Tate who announced earlier this year that he will be stepping down as CEO at the security, fire and telecare certification body after 16 years in the role.

At the BSIA, Carmichael – who joined the Trade Association back in 1998 in the role of technical officer – is responsible for co-ordinating all technical and quality matters within the Association. These duties include acting as the organisation’s representative on various UK and European standards committees and serving as the UK’s representative on various Cenelec and Euralarm committees monitoring EU Directives that directly impact BSIA members.

In addition, Carmichael’s responsible for membership liaison within the BSIA’s technical sections, and works closely with other industry organisations such as the ABI, ACPO, ACPOS and several inspectorates on technical and any other issues that may affect BSIA members.

Indeed, Carmichael’s existing duties on those UK and European committees, along with his strong technical background and close working relationship with a variety of industry organisations, afford him the ideal credentials to steer the SSAIB in its next phase of growth.

Carmichael’s background also includes over 20 years’ experience in the Army across various technical/engineering support roles with REME, as well as a short spell as an electromedical engineer with the NHS.

For the time being, Carmichael will remain at the BSIA and take up his new post next March following a handover period shadowing his successor. The BSIA is presently seeking a replacement for Carmichael to head the technical team at Kirkham House in Worcester. 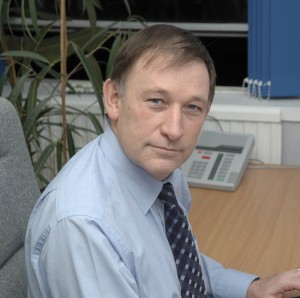 Alex Carmichael: the new CEO at the SSAIB

“I’m delighted that someone with Alex’s skill set will be heading up the SSAIB,” enthused Geoff Tate. “I’ll be handing over the reins to someone with over 15 years’ involvement in the security sector where he’s widely known and respected.”

Tate continued: “Besides working with him during a transitional handover, I’ll remain in close contact with Alex as the SSAIB’s chairman. It’s a significant boost for the SSAIB to appoint a new CEO of such calibre and provides the foundation for our future. SSAIB-certificated organisations in the security, fire and telecare industries can rest assured that they’ll be in good hands with our staff under Alex’s capable guidance.”

Founded in 1994 and based in Tyne & Wear, the SSAIB is a leading certification body for organisations providing electronic security systems, guarding security services, fire protection, alarm and telecare services systems in the UK and Republic of Ireland.

Over 1,500 companies are now listed on the SSAIB’s register.