Event security specialist Showsec’s crime reduction partnership with Leicestershire Police has produced another significant drop in incidents at the Download Festival. The impact of the joint operation for the 2015 event at Donington Park in the Midlands has resulted in a fall of 35% in reported criminal activity. That follows on from a reduction of almost 70% at the 2014 Festival.

What makes this further decrease particularly satisfying is that there was a considerable increase in the number of people who attended Donington Park this time around. The whole experience for the 80,000 Heavy Metal and Hard Rock music fans who attended was made all the more enjoyable by the effect of a joint crime reduction strategy aimed at enhancing Download’s reputation as the UK’s premier event of its kind.

Showsec worked closely with Leicestershire Police on the introduction of a specific Crime Reduction Strategy for the first time in 2014. This had a profound effect for a festival which could already point to relatively low crime figures for events of this type. Indeed, crime figures at Download have been on a downward curve since 2011 and are now at a five-year low following Leicestershire Police’s publication of the latest results.

At this year’s event, organiser Live Nation introduced cashless RFID technology which meant there was very little cash on site while the police trialled facial recognition technology. Results of the effectiveness of this particular trial are subject to a separate report. 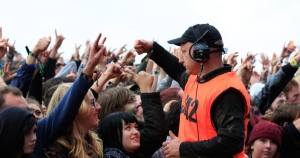 Festival director John Probyn highlighted the importance of these measures in providing the best possible experience for Download’s loyal customers. “We’re absolutely thrilled that crime figures have fallen again at this year’s Download Festival,” enthused Probyn. “Every year, we work tirelessly with Showsec and Leicestershire Police to ensure that we provide the safest environment for our fans to enjoy nothing but fun and great music. These latest figures are not only testament to the strength and effectiveness of that partnership and the initiatives we introduce to keep the fans safe, but also to our incredible community of Download festival goers.”

Detective Inspector Matt Ditcher, who was in charge of Leicestershire Police’s Crime Reduction Strategy, commented: “Crime at Download has always been low, but this year has been really exceptional. When you consider that 80,000 people flood into North West Leicestershire over five days, almost doubling the size of the local population, it’s incredible that so few crimes have been reported to us. The figures reflect the hard work and co-operation that occurs between ourselves, Live Nation and Showsec. We work and patrol together to prevent people falling victim to crime either by encouraging them to keep their belongings safe, carrying out proactive joint patrols or by identifying and removing those people who are acting suspiciously. It’s obvious that our strategy works really well and has been a great success.”

Showsec placed great emphasis on further development of the Crime Reduction Strategy as the award-winning company looked to build upon such a positive outcome last year.

“We’re continually seeking to raise the bar with our operations, but achieving further progress in this instance presented quite a challenge for us,” explained Showsec’s director Simon Battersby, who served as director of security for this year’s Download Festival. “This was due to the reduction in crime being so high in 2014 and also due to this year’s Download attracting a considerably higher turnout, both in terms of the large numbers who attended the festival and those who populated all of the camp sites.” 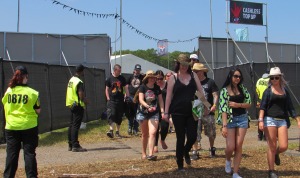 Battersby continued: “It’s a measure of the close liaison which we have developed with Leicestershire Police that, together, we were able to achieve another significant reduction in crime. “Simon Cole, the Chief Constable of Leicestershire Police and the Gold Commander, Chief Superintendent Chris Haward, were both praiseworthy of the partnership. The introduction of our own specific Crime Reduction Strategy was piloted at Download last year and then subsequently adopted at other festivals. We believe this partnership in the case of Download and those orchestrated with police forces for festivals in other parts of the country can develop safer and more secure environments in which customers can realise even more enjoyment out of their festival experience.”

The Download Festival is traditionally one of the largest event operations taken on by Showsec each year. It was the commitment and professionalism of the team at all levels which ensured the company rose to the challenges in this instance – and one in particular. 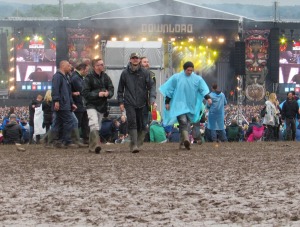 “The wet weather was obviously one of the biggest challenges,” said Battersby. “It is, of course, all part of working at festivals in an English summer, but even though we’ve experienced it before and know what to expect, it doesn’t make it any easier. What does help, though, is having good-natured Download fans on site who accept the weather as being part of the whole experience. They may be soaked to the skin and covered in mud, but they don’t let that spoil their enjoyment of the whole occasion.”