Event security and crowd management specialist Showsec has won a new contract with one of the UK’s most iconic sporting venues. The company is now providing its services at Silverstone, the world-renowned home of the Formula One British Grand Prix as well as many other high profile motor racing events in the sporting calendar.

The contract win represents a highly-significant development for Showsec as the company endeavours to develop an even stronger presence within the world of sport.

The greatest events in British motor racing take place at the Northamptonshire circuit during the course of a packed programme which runs from the end of March right through to the beginning of November. 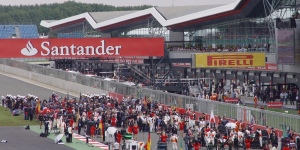 Showsec has won a prestigious security and safety contract at Silverstone

“This is a prestigious opportunity for the company to work with a venue which rightfully enjoys iconic status in the world of sport and, indeed, beyond that arena,” explained Richard Church, Showsec’s regional manager for the Midlands. “We feel privileged to be given this chance of playing a key role in upholding that proud reputation over the busy programme of events which lies ahead, and look forward to this being the start of a long-term relationship with the client.”

Church added: “We believe there’s real synergy between Silverstone and ourselves in terms of the commitment to customer experience. Our own experience of successfully delivering crowd management and security plans for large-scale sporting events, such as the Tour de France last year, will certainly be of value to us in undertaking this exciting new challenge.”

Showsec is now drawing on its strong management infrastructure to lead operations at Silverstone over the coming months. The contract delivery will be headed up by Church and East Midlands area manager Joe Milner. Further support for account manager Chris Senior will be provided by area managers Ieuan Fury and Louise Stockden.

“The size and scale of this opportunity is highlighted by the fact that there are motor racing events virtually every weekend across a seven-month period,” stated Church. “The circuit does have its own in-house security team, though. In some cases, such as for smaller events, we will be providing support to that team, but at the other end of the scale there are massive occasions such as the British Grand Prix.”