Over the summer, Chelsea FC has been busy with pre-season preparations at its Stamford Bridge retail Megastore in readiness for the start of the new Premier League season. Closed since the end of May, the Megastore has undergone its first major refurbishment since the official opening over a decade ago.

The new, larger Megastore, which opened on Monday 3 August, features lots of innovations designed to improve the visitor experience. Store security and marketing tools have also been upgraded to improve efficiency for the Megastore’s management team.

Intrepid Security was tasked to replace the existing Electronic Article Surveillance (EAS) tagging system (which the company originally installed five years ago) with its latest RF system. Designated Rembrandt, this helps to update the look of the security to match the new store interior, in addition to providing the benefits of the latest tagging technology and reliability. 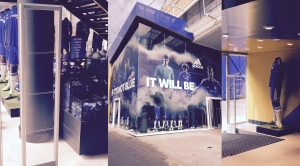 The Rembrandt systems are sited at three points in the store: one at the entrance and one at each of the two exits (one of which is only open on match days to cope with the 10,000-plus fans who pass through the doors).

Intrepid has also added five thermal overhead people counters within the store, in turn allowing the Megastore’s management to monitor traffic flow on each of the two floors, as well as between floors, on the two staircases. This should enable the team to improve staffing levels as well as merchandising, and generally give a much better level of service to their customers by fully understanding the routes through the store.

Paul Newbury, who has overseen the project for Intrepid Security, told Risk UK: “The new Rembrandt tagging system is technically superior to anything else available for the price point and is working a treat. By working closely with the retail team at Chelsea FC, we made sure they received the people counter coverage they require. By monitoring the people traffic by counter location, members of the team will be able to identify customer ‘hotspots’ and generally busier areas within the store so that they can then maximise future merchandising opportunities.”

The club already has already gained valuable merchandising data following the first home game of the season against Swansea City which they will build on through the coming months to expand sales and merchandise even smarter.