According to Government figures, the UK’s Fire and Rescue Services have attended nearly a quarter of a million false alarm incidents throughout the last two years, with the majority caused by faulty fire system apparatus. Yet maintaining thorough records of testing and maintenance of a property’s fire safety system has been a legal obligation for domestic premises and houses with multiple occupants in England and Wales since the Regulatory Reform Fire Safety Order 2005 (RRFSO) was introduced.

In response, Hochiki Europe has launched “the industry’s most comprehensive fire system logbook” for its customers. The new logbooks provide guidance in line with the UK’s most recent legislation to help those responsible for the upkeep of fire safety systems to accurately record false alarms as well as required maintenance and testing processes, in turn ensuring compliance.

The RRFSO is supported by BS 5839, a Code of Practice published by BSI which recommends any owner of a fire detection system records all system events in a suitable logbook.

Hochiki Europe’s new logbooks have been compiled by a team of BAFE consultants. The logbooks allow customers to monitor system activity, abide by UK legislation and have their records to hand in the event of a Health and Safety audit.

The A4 logbooks contain 36 pages of fire system-related forms and checklists in which end users can record false alarms, tests and maintenance work, panel access codes and battery capacity.

The new logbooks also provide written guidance for users around their responsibilities when facing false alarms, changes to the building, routine system attention, pre-alarms and recommendations on how to properly investigate fire safety systems. 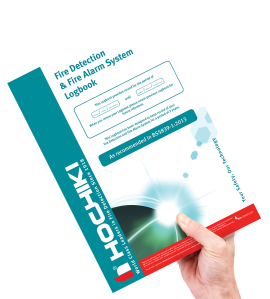 Paul Adams, deputy marketing manager at Hochiki Europe, said: “Understanding the history of a fire safety system and recognising patterns in its activity can be a crucial element in preventing fire incidents. As shown by the BS 5839 Code of Practice, logbooks play an important role in fire safety and are required by law. By giving our customers the option to buy logbooks directly from us at the same time as their system components, they can save time and ensure that they’re following the most up-to-date compliance practices.”