A survey has revealed that nearly three quarters (73%) of individuals who live or work in the City of London are concerned about terrorism compared to 68% of all London adults. An even greater number of Londoners (87%) think that members of the public are important in fighting terrorism, with nearly three quarters (73%) of survey respondents stating they’re likely to report suspicious behaviour to the police.

The survey, undertaken after the UK terrorist threat level was raised from ‘Substantial’ to ‘Severe’, shows that the message from the City of London Police to remain vigilant at all times is one shared by the public. The survey also highlights a gender bias, with 76% of women concerned about terrorist attacks compared to only 59% of men.

The City of London Police continues to pioneer a new and innovative approach to deter terrorism and detect crime through Project Servator. This involves joint deployments with the British Transport Police (BTP) as well as private sector security officers from hundreds of businesses to ensure a ‘Ring of Steel’ around The Square Mile. 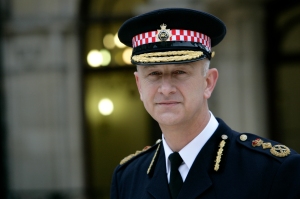 Adrian Leppard – Commissioner of the City of London Police – explained: “Members of the public should be vigilant to the threat posed by terrorism. This survey shows that they are willing to work with the police to prevent such attacks. The people of London are resilient and knowledgeable about the risks from terrorism and know they are key to helping fight that threat.”

Commissioner Leppard added: “Project Servator’s success lies in the partnership between the City of London Police and British Transport Police working with the private security industry, businesses and the public to create a ‘Ring of Steel’ around The Square Mile.”

Project Servator uses behavioural detection officers and specialist teams to spot suspicious activity and has already led to a total of 98 arrests and 31 cars being seized since launch in February of this year.

Servator involves new tactics and cutting-edge training for police officers that will help deter people from carrying out hostile reconnaissance and detect those with malicious intent. It also increases the opportunity for interaction between police officers and members of the public, provides further reassurance to the public and helps deter and detect other criminal perpetrators.

Hostile reconnaissance is the purposeful observation of people, places, vehicles and locations with the intention of collecting information to inform the planning of a hostile act against a target. Criminals – whether extreme protest groups, organised crime groups or terrorists – have to conduct hostile reconnaissance in order to plan a successful attack. If they can be disrupted and deterred at an early stage, it’s likely that they will abandon their plans.

Following three years of intensive work and study by a Government organisation, the City of London Police ran an initial pilot scheme which heralded a change in the way police use tactics to deter hostile reconnaissance. Due to the way in which the scheme works, these tactics should also have beneficial effects on crime in general.

*Unless otherwise stated, all figures are from YouGov plc. The total sample size was 2,076 London adults. Fieldwork was undertaken between 24-30 October 2014. The survey was carried out online. Figures have been weighted and are representative of all London adults (aged 18+)