A programme of training for security officers known as eGuarding™ has been developed by security and risk management specialist Pilgrims Group to tackle some of the biggest challenges faced in the sector, and is already delivering significant benefits for the organisation’s customer base.

The new interactive online training package was developed in-house. In recent tests, staff who undertook the training showed a 40% increase in their knowledge and ability to apply the learning to real life situations in their day-to-day roles.

Pilgrims Group’s Chief Operating Officer David Freear explained: “We developed the training last year in response to a number of challenges which can be found within the security guarding sector. These include lack of continuous training and officers not always being up-to-speed with standard operating procedures together with the general routine and monotony of the role, all of which can ultimately mean security officers may not be as alert and ready to deal with emergencies as they could be.” 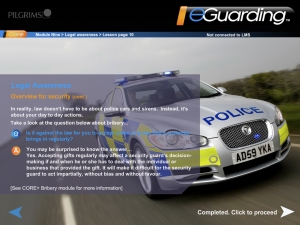 The training system was developed to be simple, strongly visual, engaging and interactive, covering all the key skills and competencies required. The officers can complete the course around their day-to-day roles.

“What we have created is unique and innovative. There is nothing like it out there,” added Freear. “We sought to create something which challenges officers to think, to understand how their roles fit into the wider picture and provide regular assessments and practice. We wanted the officers to feel more motivated and further engaged with our clients’ businesses and therefore not just happier at work but also more responsive.”

The training package is now part of a major programme of training, tracking, examinations and competencies which are continually monitored and eventually lead to a Pilgrims Competency Licence.

To maintain their currency and continue to hold their licences, each officer must now complete and pass an online assessment and examination on a regular basis.

David Humm, security manager for one of Pilgrims pharmaceutical client’s sites, was one of the first to complete the training. Humm commented: “When I was informed that Pilgrims was developing an e-Learning package I hoped it would be interactive, progressive and, most importantly, offer me something job-specific and relevant to my role. My team and I were fortunate to have had the opportunity to trial the system before it was rolled out through the company. I was really impressed with the work which had been put into the whole concept. I found the platform easy to navigate and operate and, thankfully, it’s not remotely boring as it really captures the user’s imagination.”

David Freear added: “One of the major benefits to clients is that the training can be tailored to their company’s requirements, which means they can have an interactive training package that’s bespoke and covers the specific threats and issues the business may face.”

The training system is being continually developed with further enhancements to be incorporated across 2014-2015.

The task of selecting a competent fire risk assessor has been made easier thanks to the publication of two key guidance documents, as the FIA’s general manager Martin Duggan reports.

The Fire Risk Assessment Competency Council is a work stream that operates within the wider Fire Sector Federation. The Council has now published a set of criteria against which the competency of those undertaking fire risk assessments can be judged.

There’s no legislative requirement for the fire risk assessment procedure to be carried out by a competent person. This is to avoid an implication that, under the legislation, every duty holder needs to employ the services of a fire safety specialist (such as a consultant) to carry out their fire risk assessment.

However, for many premises the duty holder seeks the services of an external consultant (‘a fire risk assessor’). In the case of larger, more complex or high risk premises, this is often appropriate as the task might well be beyond the abilities of the duty holder.

Some members of the business community feel that it would be helpful to be able to access information on fire risk assessors with an appropriate level of competency to help them comply with the legislation. There has been growing concern regarding the competence of those who provide fire risk assessments on a commercial basis (ie for a fee).

Data from the English Fire and Rescue Services suggests that the main compliance failure leading to enforcement action is a failure by duty holders to carry out a suitable and sufficient fire risk assessment. This is coupled with the emergence of inadequate fire risk assessments for premises that have suffered multiple fatality fires.

As a result of these concerns, the Fire Risk Assessment Competency Council (which is made up of a broad range of relevant fire sector stakeholders, including the Fire Industry Association) emerged with the encouragement of Government. Its objective has been to establish agreed, industry-wide criteria against which the competence of a fire risk assessor may be judged. It’s anticipated that these criteria will be used by professional bodies and third party certification bodies who register or certificate fire risk assessors, and also by commercial companies providing fire risk assessment services. The ‘competency criteria’ was published in December 2011.

In February last year, the Competency Council published ‘A Guide to Choosing a Competent Fire Risk Assessor’. This document is provided to help those with this responsibility decide who should carry out a fire risk assessment so that the premises comply with the applicable fire safety legislation.

No matter who carries out the fire risk assessment, the duty holder retains the responsibility for ensuring the adequacy of that assessment. If you’re employing a specialist to undertake your fire risk assessment, while you are not expected to be an expert in fire safety you should make reasonable checks to ensure that they’re competent to do the job properly.

It’s important that the person who carries out the fire risk assessment is competent. There are two principal methods by which people can demonstrate their competence:
• Professional body registration schemes
• Certification by a certification body that is UKAS accredited for the activity

The Fire Risk Assessment Competency Council recommends the use of fire risk assessment companies (including sole traders) which are third party certificated to appropriate schemes and operated by certification bodies which have been UKAS accredited to certificate against such schemes.

With two documents already published, the work of the Competency Council may be over – or is it? The proof of competency of fire and rescue services’ inspecting officers is now being discussed. What criteria should be used to check and how will this be measured are obvious questions to pose.

Could the Competency Council rise again to help?

Just months before Big Brother Watch celebrates its fifth anniversary, the civil liberties organisation has unveiled a new leadership team following the departure of director Nick Pickles, who left the campaign in May this year to join Twitter as the social media site’s public policy manager for the UK.

Emma Carr takes up the role of director with immediate effect while Renate Samson becomes the organisation’s CEO (a newly-created role).

Carr joined Big Brother Watch in February 2012 as deputy director and became acting director in May this year upon Pickles’ departure. Over the course of the last two and a half years, Carr has worked hard to challenge policies that threaten civil liberties, privacy and freedom.

Carr has made an active contribution to the organisation’s research, frequently appearing on national and international television and radio programmes, and actively spreading the ethos of the organisation at conferences around the world.

As the director of Big Brother Watch, Carr will be overseeing research, media and campaigns.

In the new role of CEO, Renate Samson will oversee Big Brother Watch operations, parliamentary outreach and new projects. The first of these will be a new educational outreach programme designed specifically for those in higher education. Further details about this project will be announced in due course.

Samson has spent the past four years as Chief of Staff to David Davis MP, working on every major civil liberties debate during this Parliament. Samson joins Big Brother Watch with a wealth of contacts and knowledge which will be vital as the campaign expands over the coming years.

Samson will begin her new role later this year after the party conference season has concluded.

In addition, Big Brother Watch researcher Daniel Nesbitt will also be taking on the role of research director. Nesbitt has been with the campaign for 18 months, during which time he has produced high calibre research and appeared as a spokesperson for the organisation in the media.

Armed with over 20 years’ experience of exporting, Moore has made a hugely positive contribution to the international growth of a number of businesses on the international stage, working in the UK, Taiwan, Dubai and Libya.

As managing director of Elmdene – the dedicated developer of electronic solutions for both the security and fire sectors – Moore has gained valuable and in-depth experience of exporting the company’s systems worldwide (most notably to Germany, France, Italy, Spain, the Nordics, South Africa and the Middle East region).

Moore has honed his thought leadership skills throughout a highly successful career which has involved teaching at the Royal Navy Engineering University and lecturing at the National Police College in Taiwan.

In 2003, Moore established Detector Technologies and, in just six years, oversaw the company’s growth from a start-up to an international business operating from offices in the UK, Australia, Dubai and South Africa.

Indeed, in recognition of his ongoing involvement with the Export Council, Moore was the deserving recipient of the 2014 BSIA Chairman’s Award for Contribution to Exporting. This accolade was bestowed at the BSIA’s 2014 Annual Luncheon.

Opportunities and risks around exporting

Speaking about this new and extremely important pro bono role, Moore stated that he’s tremendously ambitious when it comes to the Export Council’s future.

When asked about his main focus as chairman over the next 12 months, Moore replied: “Through the Council, I’m very keen to educate members about the opportunities and risks around exporting. There’s a natural assumption that exporting should be the first strategy to grow a business, but that isn’t necessarily true. Unless there’s an unquestionable opportunity, it’s only when the home market is near to saturation and the products on offer enjoy market acceptance that companies should go down this route.”

Moore continued: “Many British companies have products that will only sell into regions that are discerning about quality, innovation and compliance, etc. Given the extra price tag this normally brings, including the amortisation of self and third party approval, companies will not normally be competitive when the talk is purely about price.”

The new chairman is also keen to emphasise the value that the Export Council can bring to its current and prospective members.

Celebrating its 20th Anniversary in 2014, the BSIA’s Export Council is a forum which allows relationships between the UK’s security industry and overseas buyers to be founded and cultivated.

It also serves as an invaluable port of call for overseas-based contacts interested in developing a relationship with a UK company either as a partner, customer or distributor.

*Further information about the BSIA’s Export Council and the benefits of BSIA membership is available at: http://www.bsia.co.uk/export-council