The results of new research carried out on behalf of the British Security Industry Association’s Export Council have brought into sharp focus the key technologies (such as biometrics for access control and HD CCTV) that have been having a major impact in the Middle East security marketplace over the past year.

The survey also confirms that there remains strong demand across the region for the best of British security systems despite increased international competition, with Saudi Arabia and the UAE particularly prominent where order books are concerned.

Looking in more detail at the research results, the majority of the Export Council’s member companies (89%) who responded to the survey acknowledged that they’re active in this pivotal region (a figure which is up by 2% year-on-year).

Of those questioned, an impressive 50% reported that they’d witnessed a notable increase in revenues derived from the Middle East over the past 12 months, while a further 12.5% confirmed that business levels were unchanged.

Significantly, the outlook for the coming year is set to be even stronger with all members questioned saying they anticipate a rise in orders.

Drilling down to the specific parts of the region that are generating the most sales for member companies, the two countries heading up the list from detailed analysis of the research are, respectively, Saudi Arabia and the UAE – both on 29%.

According to the member companies surveyed, other geographical areas making a strong impression over the past year were Turkey, Qatar and Kuwait.

Biggest impact in the Middle East

When asked to respond on the approach to security technology which they felt had made the largest impact in the Middle East over the past 12 months, ‘biometrics for access control’ came out well ahead of everything else. In fact, it was singled out by half of all of those surveyed.

Also featuring strongly in the research were, once again, HD and megapixel CCTV, Physical Security Information Management (PSIM) and switch mode power supplies, each one being selected by 17% of the respondents.

Looking more closely at the strong push to have biometrics integrated with access control solutions, this serves to underline the increasing recognition among BSIA members’ customers across the Middle East of the enhanced security – and day-to-day management of sites – that can be delivered by building in the ability to uniquely identify individuals from their physical characteristics.

Alongside this, the roll-out of HD and megapixel CCTV cameras is proving a popular choice thanks to the ability to provide additional detail in security critical applications (among them banks and hotel lobbies).

The rise of PSIM – which also stood out in last year’s survey – is in line with expectations given the surge of interest in bringing together and operating a wide range of security elements, most notably where larger projects are concerned.

When it comes to switch mode PSUs (Power Supply Units), the strong showing in the Export Council’s research can, in part, be attributed to the much greater efficiency levels that may be realised compared to traditional linear models, allowing them to run significantly cooler and to offer enhanced reliability.

Of course, as with any research there were a couple of surprises, specifically the fact that hybrid security solutions and VCA (Video Content Analytics) did not feature in the rankings this time around. Both have scored highly in previous years.

On the subject of what’s influencing customer buying decisions in the region, the research investigated the leading factors which Export Council members were finding on the ground.

Encouragingly, it was discovered that compliance with industry standards was ranked as the most important decision-making factor by a third of respondents (33.3%) when dealing with Middle East customers. It’s something that has always been a key consideration for BSIA membership.

Government requirements were also singled out by a similar proportion of respondents. This reinforces the importance for Export Council members of working with partners who have strong local knowledge of the region. Other subsidiary factors mentioned included ease of use/operation and technological innovation.

Beyond this, the survey sought to discover which vertical markets were leading the way in taking up solutions offered by BSIA’s Export Council member companies. Not surprisingly, it was reported that the top market sector was oil and gas on 50%, confirming the economically vital role the industry continues to play.

Following on from this, in second place (on 33.3%) was office developments/prestigious buildings. Other markets of note were Government and residential. BSIA members are also active in sectors such as transport, hotel/leisure, retail, banking and domestic.

Putting forward some thoughts on the survey, Greg Stuttle (chairman of the BSIA’s Export Council) explained: “The new Export Council research serves once again to underline the phenomenal demand out there in the Middle East for the best that British security solutions can offer and, in particular, those from BSIA member companies.”

Stuttle continued: “Moving ahead, it’s encouraging to reflect on the high degree of confidence expressed by Export Council members in their prospects for 2014. Significantly, these findings tie-in with the results of our annual ‘State of the Nation’ survey conducted late last year, which served to signal a major strategic shift. The Middle East is now the single most important target market worldwide for BSIA members over the next 12 months, whereas only a year ago it was Western Europe that was very much to the forefront.”

Industry standard to the fore

Turning back to the latest research, from a BSIA perspective Stuttle said the fact that members report industry standards ranking highly in the thinking of prospective customers is encouraging and makes a welcome change from the perennial focus on initial purchase price.

“On the technology front,” asserted Stuttle, “it certainly appears that biometrics for access control is coming to the fore, and this probably reflects the way in which this technology has matured over the past few years.”

In conclusion, Stuttle commented: “Although the survey shows that Saudi Arabia and the UAE head-up the table when it comes to BSIA members’ Middle East business activities, it’s important to stress that a great deal of attention is also being given to other, fast developing areas across the region with Turkey, for example, offering a wealth of opportunities for the future.”

To find out more about the work of the BSIA’s Export Council and the benefits of buying security solutions from member companies, visit http://www.bsia.co.uk/export-council

With the support of Crossrail Limited, investigators from the Security Industry Authority (SIA) were joined by officers from the Metropolitan Police Service and officials from HM Revenue and Customs as well as Home Office Immigration and Enforcement.

Dave Humphries: the SIA’s director of partnerships and interventions

This partnership operation was conducted to ensure that those working across the 12 sites were correctly SIA licensed, have the right to work in the UK and were being paid at least the National Minimum Wage.

The taskforce visited sites across Paddington, Bond Street, Liverpool Street, Woolwich, Plumstead and Custom House, checking 40 security officers in total. Of those inspected, 39 were correctly SIA licensed. One individual was found to be working unlicensed at Paddington. Enquiries are ongoing.

There were five warnings issued to security officers who had failed to notify the SIA of a change of their address and who failed to display their licence. Both are a breach of SIA licensing conditions. 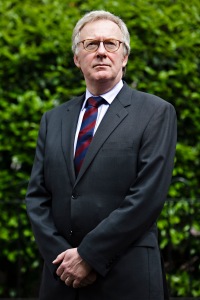 Bill Butler: CEO at the SIA

One arrest was made on an individual suspected of breaching his visa conditions. Enquiries are being taken forward by Home Office Immigration and Enforcement.
All individuals stated that they were being paid above both the London Living Wage and the National Minimum Wage.

Dave Humphries, the SIA’s director of partnerships and interventions, said: “This SIA-led operation has been made possible with the support and co-operation of key partners. The co-operation of the enforcement partners involved shows the cross-organisational commitment to ensuring that those working on and operating construction sites are doing so legally.”

Humphries added: “The successful results of this operation will reassure the public that we will continue to work with this multi-agency approach to ensure compliance with the law.”

HMRC’s Jennie Granger, director general of enforcement and compliance, stated: “HMRC is pleased to work with our partner agencies to make sure that workers in the UK are paid what they’re entitled to and pay any tax owed, in turn creating a level playing field for employers and employees.”